We got hit by some illness and stuff, so we had a bit of downtime since our last update. The wicked news is that we were selected as Site 3 coLaboratory’s Artists in Residence! What is Site 3? Site 3 is a Toronto-based maker space that consists of awesomely creative people… many with engineering, electronic, and/or pyro-based creative projects (just to name a few). Check ’em out at site3.ca

So what are we doing for them? Well, we’ve been preparing to combine our love for media and installation, with our love for gaming and 80’s B movie Sci-Fi, to create a live-action gaming environment entitled, The L.E.A.P. Engine. We figure a lot of developers (and one of our past projects) are focusing on making your body a controller for virtual realms (which is fun and awesome!..but…), so why don’t we just turn the entire bloody environment into a controller?

The L.E.A.P. Engine is an interactive experience with an 80’s sci-fi futuristic aesthetic. The project emulates a classic laser-avoidance “diamond heist” scenario by allowing the player to step into the role of the cosmic burglar. With a limited amount of time, the player must pass through a complicated series of changing and alternating laser patterns without tripping any of the lasers in order to retrieve the object to win the game. If the player trips a laser, it is game over, and the player can either play again or the next player enters the game. The physical setup involves a series of low powered lasers set up in “fences,” each with a distinct and changing firing pattern. The player must pass by each fence in order to retrieve the object back through the fences to complete the game. A medium fog/haze fills the room to create an aesthetic and to make the lasers visible in the air.

This is quite unlike anything we’ve done before, so we’re going to be blogging our progress as it develops. In the mean time, start training, cadets! 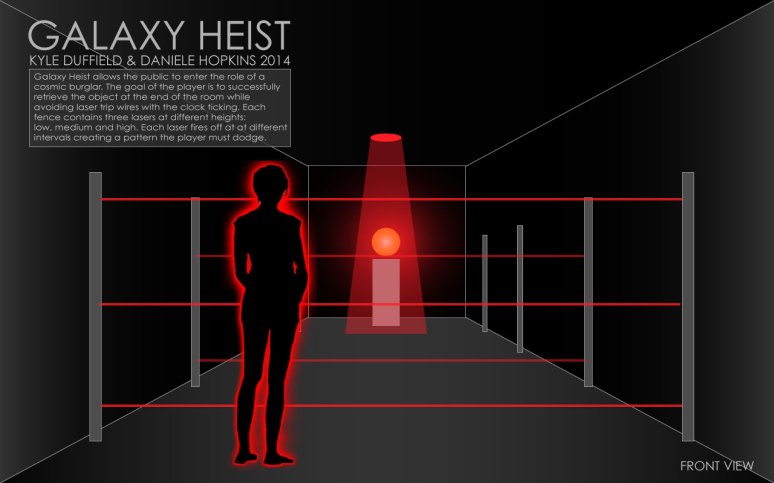 Diagram of Galaxy Heist, developed in conjunction with Site 3 CoLaboratory.